EA Elektro-Automatik completes expansion of its 10000 series of enhanced performance, autoranging, bidirectional and regenerative programmable DC power products with a new range of 4U solutions 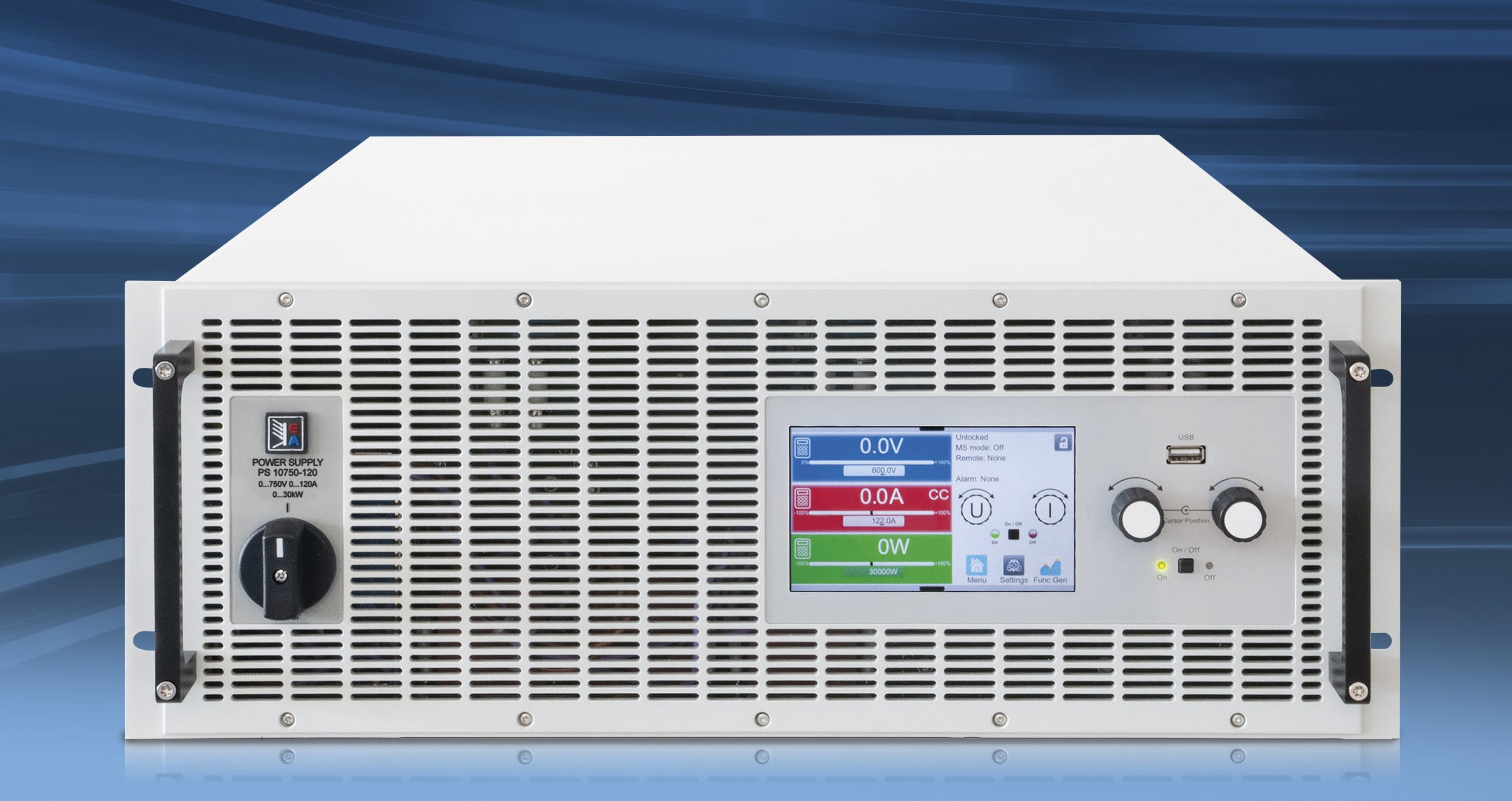 San Diego, April 21, 2022 – EA Elektro-Automatik, a worldwide manufacturer of DC power supplies for R&D and manufacturing, completes introduction of its 10000 series enhanced and expanded line of EA-PS and EA-PSI programmable DC power supplies, EA-PSB bidirectional DC power supplies, and EA-ELR regenerative DC electronic loads. This final product launch of the series includes four classes of new 4U models offering a greater range of power from 10 kW to 30 kW. The models provide voltages from 10 V extending up to 2000 V, and provide output current up to 1000 A.

All 10000 4U solutions are state-of-the-art programmable DC power electronics with true autoranging and touchscreen control in many languages. High power density and superior performance in a 4U form factor:

Save test development time with seamless operation between all models

All 10000 series instruments operate on the same firmware and have the same touchscreen user interface. The physical layout is the same, and all instruments have similar input and output characteristics. The common programming and user interface saves test development and setup time when building test systems that have requirements for multiple power instrumentation.

Access greater voltage and current in one device with Autoranging

All 10000 series instruments employ an autoranging output (input if an electronic load) characteristic. Autoranging enables the instrument to have a higher voltage capability at lower currents and a higher current capability at lower voltages than a power supply or load with a conventional rectangular output/input characteristic. Furthermore, an instrument with autoranging output/input can deliver/accept full power output over a significant portion of the instrument’s operating range. This is in contrast with an instrument with a rectangular output characteristic which has maximum power only at its maximum voltage and current. The benefit of EA’s autoranging capability for a test engineer is access to a wider range of voltages and currents enabling the engineer to test more applications without the need for multiple power level supplies.

The EA-PSI supplies, EA-PSB supplies, and EA-ELR loads all have a built-in function generator to allow creation of complex signals riding on a DC bias and to simulate the characteristics of various devices such as solar cells, batteries, and fuel cells. Special functions enable maximum power point tracking (MPPT) and EN 50530 for solar panel inverter testing and LV123-, LV124-, and LV148-standard based test sequences for testing of automotive components and systems. The built-in functions simplify the tasks of programming the instrument to simulate various devices and creating sequences of outputs (or inputs) to comply with key test standards.

All models of the 10000 series employ active power factor correction, typically 0.99, to minimize the power drawn from the power grid. Additionally, EA-PSB bidirectional power supplies and EA-ELR electronic loads employ regenerative circuitry to return energy back to the grid with up to greater than 96% efficiency. Regenerative circuitry saves operation costs and the expense of cooling requirements to dissipate the heat that a conventional electronic load generates.

Parallel for high-power systems up to 1.92 MW

Test engineers can parallel up to 64 of the 10000 series power supplies and loads using the Master-Auxiliary bus to enable one instrument to control all instruments in the system. The system can consist of any combination of instrument power levels within the same EA-XXX family (EA-PSB, EA-PSI, EA-ELR, etc). A galvanically isolated Share-Bus interface in each instrument ensures that all the instruments safely share the load requirements so that the entire rack can operate with full performance.