There are many advantages to simulating batteries when testing battery-powered equipment, battery chargers, or battery-management systems during design and production tests. For example, some tests require a battery to be at a particular state of charge. Charging and discharging a battery to reach that state can be costly and time-consuming.

Instead, many companies use power supplies to simulate batteries during these tests. A high-power power supply can replace many different battery types and battery sizes because of its ability to output a wide variety of voltages and currents. Using a power supply to simulate a battery gives users more control over a test, allows users to run tests more quickly, and as an added bonus, tests are more repeatable.

EA’s PSB 9000 and PSB 10000 Series of bidirectional power supplies, with the EA Battery Simulator (EABS) option, are a great choice for battery simulation. Because the PSB 9000 and PSB 10000 Series are bidirectional, they can both source and sink power. This means that they can completely simulate battery operation, including charging and discharging.

EABS simulates both the chemical and electrical characteristics of lithium-ion batteries with capacities between 20 Ah and 80 Ah and lead-acid batteries with capacities between 35 Ah and 140 Ah. The batteries can be connected in series or parallel. Users can set battery parameters, such as such as capacity, internal resistance, and state of charge, as well as test parameters, such as ambient temperature, to simulate battery operation as closely as possible.

EABS, which is delivered on a USB dongle and runs on Windows computers, controls the power supply while a test is running. During operation EABS can display data, such as output voltage and power visually, so that a user can monitor test operation. EABS can also record this data to log files, so that users can analyze this data after a test is complete.

Setting up a simulation

Setting up a simulation is straightforward, using the EABS graphical user interface, shown in the figure below. 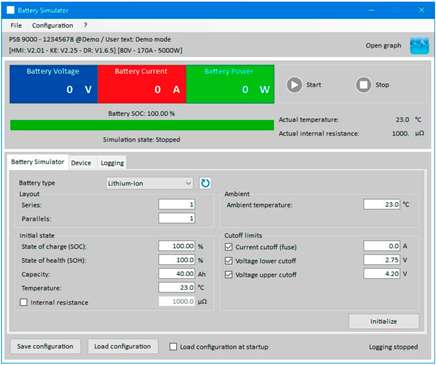 The upper part of the screen shows the actual voltage, current, and power output values. The software will read these values from the power supply, even if the simulation is not running. One reason for this is that even when the DC output is off, there may be a voltage on these terminals that comes from an external source. Also present on this part of the screen are manual start and stop controls, the simulated state of charge, the actual ambient temperature, and the actual internal resistance.