Designing and manufacturing quality fuel cells requires characterizing the device and testing device performance. For standby power stations and automotive vehicles, fuel cells are assembled in stacks to meet the necessary power requirements for the application. These stacks can generate high power; thus, high wattage power supplies and electronic loads are needed for fuel cell characterization and test. Fuel cell stacks can deliver well over 10 kW of power. Elektro Automatik not only manufactures high-power DC supplies and loads, but these products have a number of features that simplify the task of simulating, characterizing, and testing fuel cells and make the testing more efficient. 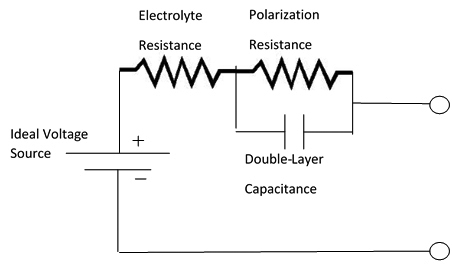 In addition, the ELR load, with its internal waveform generator can subject the fuel-cell-under-test to a wide range of dynamic load variations for both performance and durability testing. The load can stress a fuel cell with large step load changes at varying duty cycles.

Now that the fuel cell is characterized, the PSB-series power supplies, which also have a built-in waveform function generator, can simulate the output of a fuel cell. Using the simulated fuel cell, an inverter for a device such as a standby power source or a DC-DC converter for an automotive vehicle can be tested under the most realistic conditions. Just use the Function Generator Application in the Elektro Automatik Power Control Software. Enter the key voltage and current parameters, and the Function Generator App enables the PSB power supply to emulate the output of your fuel cell stack. Figure 2 shows the window for the Fuel Cell table which shows the fuel cell characteristic V-I curve and defines the fuel cell output. At maximum voltage, fuel cell output is dominated by electro-kinetic effects. In the central part of the curve, the linear, ohmic resistance of the fuel cell determines the output characteristics. At the high current-low voltage portion of the curve, the exponential characteristic is defined by energy being consumed at a faster rate than hydrogen and oxygen can diffuse to the anode and cathode to supply energy.

The simulated fuel cell output can test inverter or DC-DC performance as these loads draw both low current and high current. The results indicate how well the loads can maintain their output under the varying voltage of the fuel cell. Fortunately, you do not need a complex test setup with an external variable resistance for testing inverters and DC-DC converters. All you need is a PSB-series power supply. 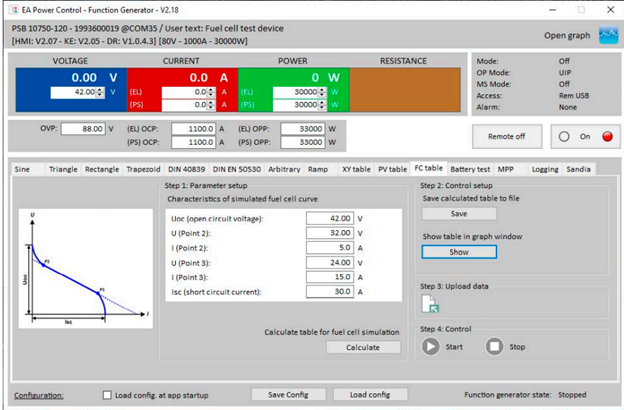 Save on extra and higher power supplies and loads 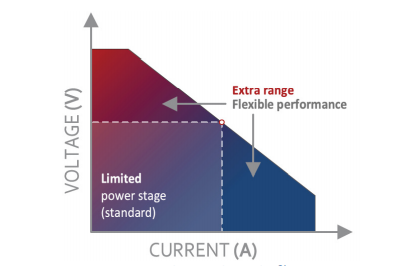 Save energy and run cooler

Both the ELR series electronic loads and the PSB series bidirectional (source and sink) power supplies can absorb power and deliver it back to the power grid with an outstanding 96% efficiency. When you use the ELR loads or the sinking function of the PSB supplies, efficient inverters in the two instruments provide the regenerative energy recovery to substantially reduce your electric utility costs. Returning the absorbed energy to the grid saves on cooling requirements for these instruments which can output and sink up to 30 kW. The instruments need lower capacity fans which run more quietly and less cooling infrastructure to maintain them at a safe operating temperature. Benefit from lower utility costs and the knowledge that you are helping the environment.

Work in any automated test environment

The Elektro Automatik PSB power supplies and ELR loads offer a number of interfaces to allow easy communication and control in a number of test environments The PSB Series supplies and the ELR loads have USB and ethernet as standard interfaces for simplified connection to a PC. With optional ModBus and Profibus interfaces, the instruments conveniently allow control by a programmable logic controller (PLC). With the CAN interface, the instruments can interface to an automotive control system. That is more flexibility than you get from other power supply and electronic load manufacturers.

The supplies and the loads have a multi-colored touchscreen display that shows all programmed and measured values. In addition, you only have to learn to operate two control knobs. For worldwide use, you can select your display to work in one of four languages: English, German, Russian, or Chinese. Working in your native language shortens the learning curve for operating the instrument and enables you to be more comfortable with the instrument.