Not only is the PSB Series bidirectional, meaning it can source (provide) and sink (absorb) current, it regenerates the current it sinks to the local power grid with up to 94% efficiency. So, in addition to minimizing test equipment space and investment, it saves on operating costs, too, by paying for itself.

In addition to controlling the input and output parameters of a battery test, the battery test system must also ensure that the test runs safely. To do this, it must monitor battery and equipment parameters during the test, including battery polarity, battery temperature, battery voltage, and current to/from the battery.

Before connecting a battery to the test system, it’s important to check that it has been connected with the proper polarity. Figure 1 shows an example of how a test system might do this. If an operator connects a battery under test incorrectly, the safety contactor will not connect the battery to the power supply. 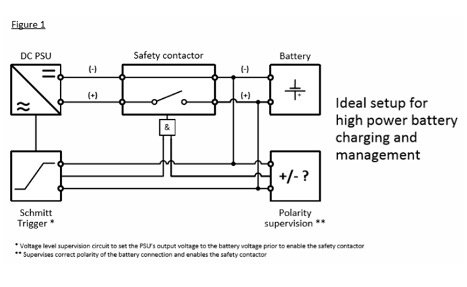 Like battery temperature, battery charge current and voltage need to be monitored closely to ensure that the battery is operating safely while under test. The PSB Series can measure both parameters, and you can set limits that will protect both the power supply and the battery. Should any of the limits be exceeded, the power supply will immediately shut itself off.